The Simpson Mod Bandit is an interesting animal in the world of helmets. The Bandit series has been well-loved by those looking for a more aggressive style. That said, modular helmets tend to be more popular with the Goldwing-riding touring crowd -- in other words, not the people you'd think of first when looking for something aggressive.


But, I'm not here to point fingers, I'm just here to tell you about a helmet. If you, like me, fall into that niche of riders who like aggressive styling but still appreciate a modular helmet, the Mod Bandit is worth your consideration.

To set the stage, I should let you know that I'm a bit of a helmet junkie. I own lids ranging from HJC to Shoei, Biltwell to Schuberth. My daily driver these days is my Biltwell Lane Splitter, but I tend to wear a Schuberth C3 Pro during colder months. The Schuberth is, in my opinion, the Holy Grail of modulars. It's dead quiet, incredibly safe, and it feels luxurious on the head. With its near-$500 price tag, I expected the Simpson to be on par with the Schuberth. Does it meet the expectations? Read on, my friends. 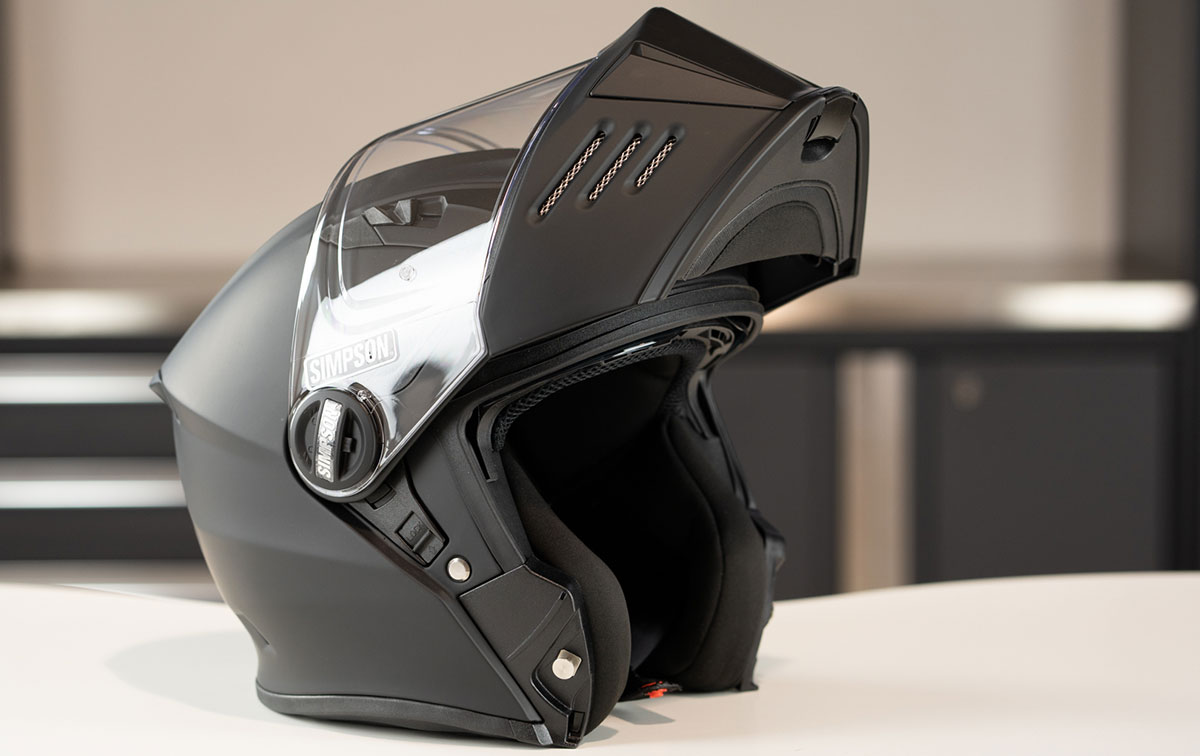 
The Mod Bandit isn't a completely new animal, even for Simpson. It merely some tweaks some features that you'll find on Simpson's other lids. In short, it's a modified Ghost Bandit, with a couple of extras. For starters, there are whisker vents and adjustable chin vents. This is in contrast to the Ghost Bandit, which has adjustable whisker vents, but no constant venting in the front. For the Mod Bandit, which is prone to fogging when not running a Pinlock insert, the constant venting is important.

The Mod Bandit also has cutouts for a communications unit, just like the Ghost Bandit. However, the Ghost Bandit's internal visor switch sits right where I would want to mount my Sena. The Mod Bandit moved the visor switch up toward the visor hinge, clearing up the side of the helmet for comms unit mounting. The switch is smooth, but requires a fair bit of force to actuate. 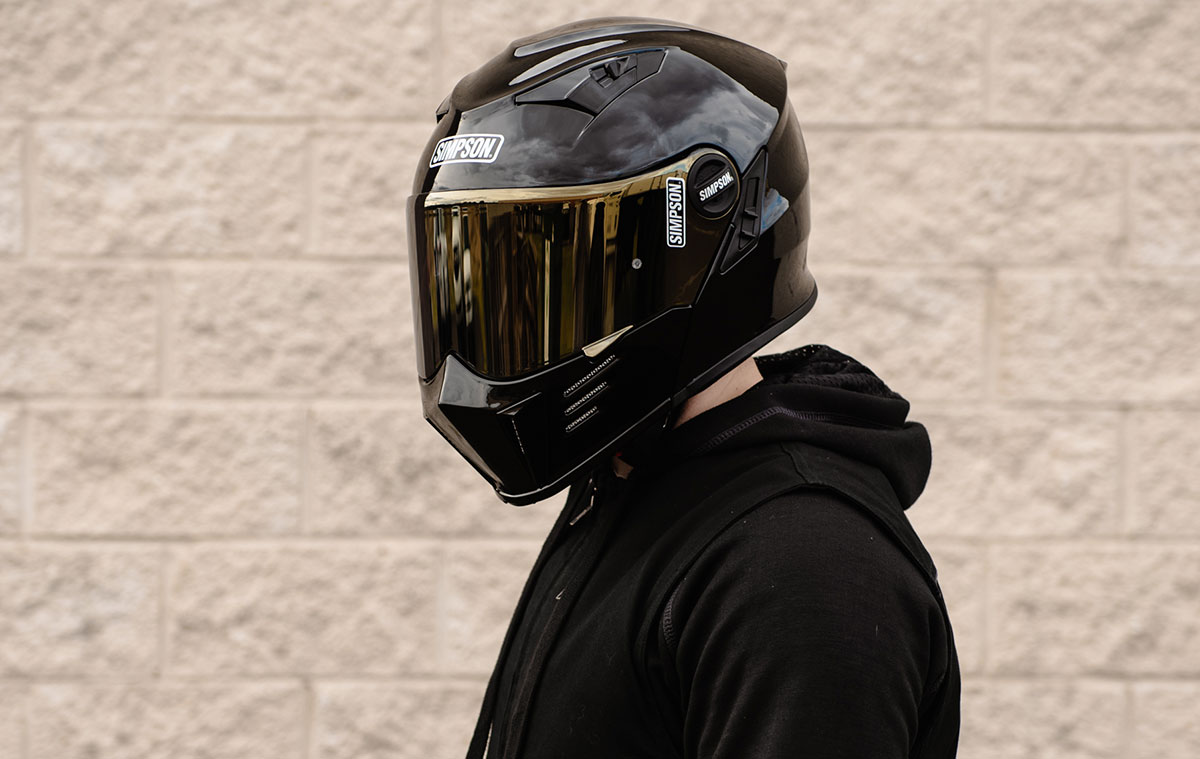 Speaking of the shield, I'm a big fan of the tool-free removal, and the Mod Bandit has a much better feel to reach the fully-closed position than the Ghost Bandit does. My one complaint is that the "city" position isn't open quite enough to keep the stock shield from fogging in my humid home state of Tennessee. If I'm riding around town, I find myself frequently lifting the visor just a touch to clear the fog, then letting it return to the city position. Even on the open road, I find that I tend to ride with the visor in the city position to keep it clear. Granted that temperatures have been in the 40s and lower 50s, and I expect fogging, but it's still worth noting.

The Mod Bandit is big. If you're looking for sleek, this isn't the helmet for you. That said, it still feels wonderfully light. Interestingly enough, it feels lighter than my Schuberth, even though it weighs 3.73 pounds compared to the Schuberth's 3.53. I attribute this to how the weight is distributed across the helmet, which balances the lid nicely on your head.

My head tends more toward the round part of round-oval. I've seen some reviews of the Mod Bandit that complain that it doesn't fit round-oval heads very well. I didn't find that to be the case. In fact, I found it to be a bit roomier than I'd expected. My head was on the very low end of the 2X size at 62 cm, and I definitely could have gone for a 1X instead.


The Simpson Mod Bandit isn’t spectacular, but it is quite nice. It’s quieter than my free-flowing Lane Splitter, though not as silent as my Schuberth. I do wish that, for the price, it had shipped with a Pinlock insert. But that said, if you’ve looked at Simpson helmets then you probably know what to expect as far as price is concerned. They ain’t cheap, and Simpson makes no bones about that fact.

The Mod Bandit doesn’t have a wide range of color options, but the finishes are superb and the logo placement is tasteful. Again, if you’re familiar with Simpson then you’re familiar with the fact that most of their helmets come in matte black, gloss black, or gloss white.

There is a plethora of shield options, including smokes, ambers, clears, and mirrors. You can use the Ghost Bandit internal shields on the Mod Bandit, so you can switch out colors or go for clear for night riding with a tinted external visor. Replacing the internal visor will run you $40. Oh, and it’s worth noting that any of the mirror shields will run you $70. If you want to add a Pinlock insert, that’s going to set you back another $35. That brings the grand total for a fully-equipped helmet over the $600 mark. Yikes!

The Mod Bandit is definitely a superior helmet to my HJC modular in every aspect. But it should be, because it’s five times the cost. I’d say that it’s on par with my Biltwell, but not quite as nice as my Shoei lids. Sadly, it’s twice the price of the Biltwell, and almost equal to my Shoei. The Shoei also carries a SNELL 2015 rating, which no modular can have.

If you’re looking at Simpson because “rah rah ‘Merica”, you’ll want to know that the Mod Bandit is actually made by Vemar, which is a subsidiary of the International Helmet Company. Vemar is Italian, and IHC is based in Switzerland. That explains why a helmet from an American brand is shipping with an ECE rating for the European market. What surprised me was that Vemar definitely falls into the budget category for helmet pricing, with most of the company’s lids in the mid-$100 price range. So when you look at the Simpson, you’re definitely paying a premium for the name.

But here’s the thing -- nothing else in the modular world looks like it. There are some more aggressive modulars out there, such as the AGV Numo or Scorpion EXO, but they lack that Darth Vader, squared-off front that has made Simpson so unique.

So should you buy it? The answer to that question comes down to how bad you want the look, and whether or not a modular is important to you. There are, honestly, better helmets for the money. There are cheaper options with the look, but they’re not modular. Again, the Mod Bandit is the only modular that looks this aggressive, so that means that you’re going to have to shell out the money if you want one.