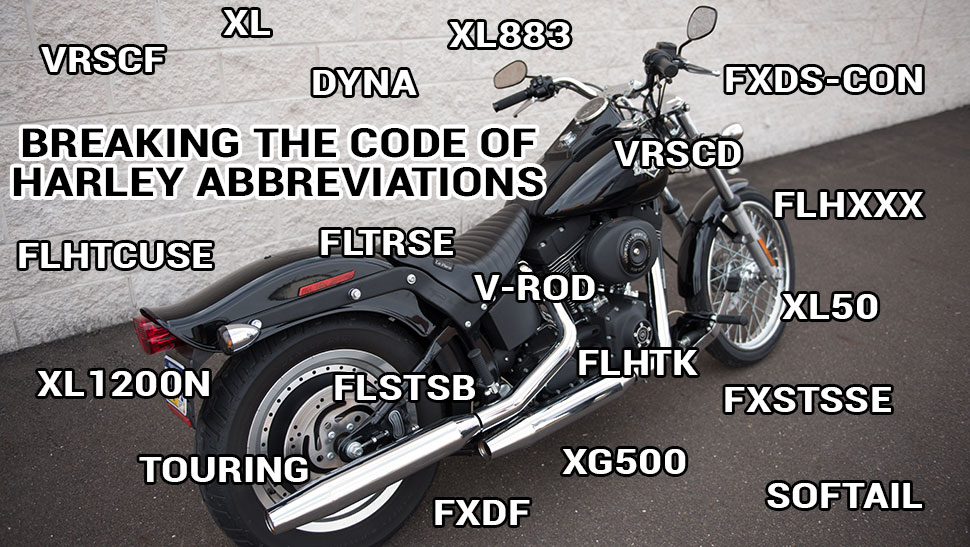 The Harley Davidson Universe is large which can lead to plenty of confusion. Our goal is to help clarify some of the perplexity surrounding Harley's Model abbreviations and aid you in better understanding some of HD's frequently used names, acronyms and styles.

In the world of two-wheels, a Harley is not simply a 'Harley.' The world's dominant motorcycle brand identifies five general families - Touring, Softail, V-Rod, Dyna, and Sportster. Each family has a set of features that makes them unique. Once inside the family, however, there's plenty of variety... brothers, sisters, parents, aunts, uncles, second cousins twice removed.

Before we get to the abbreviations and their meaning, it is worth noting where you might find them on your specific bike. Depending on whether or not your bike has any aftermarket Harley parts on it, you can usually find the name on the breather, however some Touring & Softail Models may have the name on the front fender.

As a general rule when it comes to Harley abbreviations the following three standards apply:

3rd Letter: Designates the frame style.
*This is where you can differentiate between a Touring, Softail, or Dyna Model

Any additional letter indicates features that may accompany that particular bike family. This is usually where the confusion occurs since Harley tends to use the same letter to designate different features of a bike.

Starting at the top, the Touring models are the largest model bike Harley offers.Considered the modern day Granddaddy of the Harley Family, Touring Models generally feature saddlebags, larger storing capacity, as well as extra room to accommodate those long road trips. They are also great for riders who plan to travel two-up (with a passenger) with regularity and need a bit of extra room for their passenger. This family includes the Road King, Electra Glide and the Street Glide, etc.

Next in line, the Softail Models. Harley's Softail lineup offers the traditional hard-tail look with the benefits of a more forgiving, yet hidden suspension system. For riders who prioritize comfort or who simply need a bike that will have more 'give' over bumps in the road, the Softail is an excellent choice. This is also a great choice for riders who like to ride solo or two-up.

For 2018 Harley-Davidson introduced the brand-new Softail platform. Based on a Mono-shock design, the new Softail is Harley's new platform.

The Dyna Model was first introduced in the early 1990's and offers a big-twin engine with trademark Harley style. While the suspension is hidden on the Softail models, the Dyna is easily distinguished by its traditional exposed coil suspension. Compared to the Sportster Models, the Dyna is distinguishable by virtue of its larger engine and (in some cases) slightly larger gas tanks.

The Harley Sportster Models are a smaller size bike in the Harley family and offer great versatility for either solo or two-up riding. Sportsters are offered with two motor size options - either 883cc or 1200cc.

Perhaps the most unique model in Harley's lineup, the V-Rod's feature a distinct engine that was developed jointly with Porsche. The V-Rod Models are power packed with a Revolution Engine that utilizes overhead cams and liquid cooling.

Harley rounds out their lineup with trikes and their new Street Bike series as they continue to expand into new markets - offering a bike or trike for just about anyone on the road.